The role of tralokinumab in the treatment of atopi... 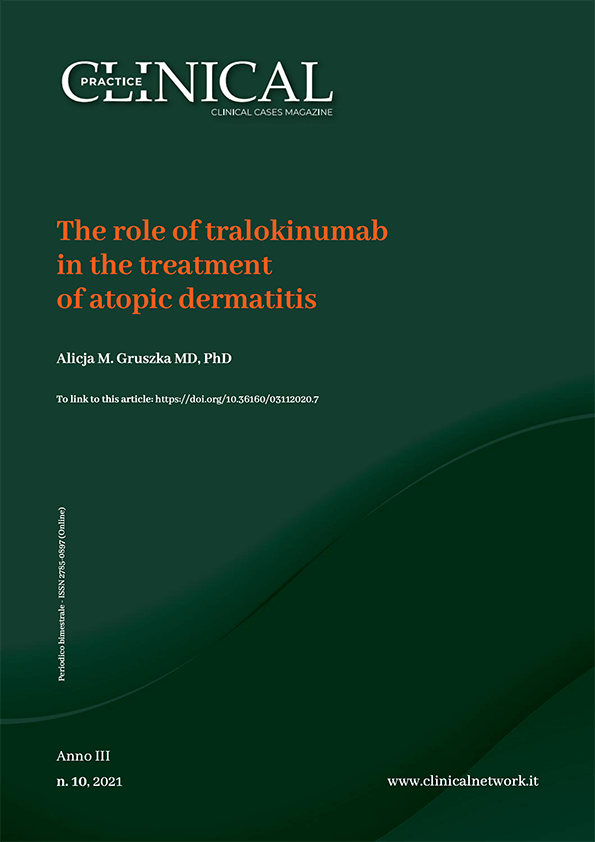 The role of tralokinumab in the treatment of atopic dermatitis

Atopic dermatitis (AD) represents the commonest inflammatory skin disorder in the developed world.1 A staggering one-fifth of the population in those countries is affected by AD.2

The disease frequently begins in childhood with recurrent eczematous lesions, initially in the form of poorly defined, erythematous patches with exudation, blistering and crusting, evolving into scaling, fissuring and skin thickening accompanied by itching and discomfort. The course of the disease can be chronic or show intermittent nature with occasional flares.1

Currently, despite continuous progress in the understanding of AD, the disease cannot be cured.2 Physicians rate the level of disease control as inadequate in many patients with a history of moderate-to-severe AD,3 suggesting the need for more effective therapies to offer patients new options and ultimately fight the disease.

This review summarises the promising efficacy and safety results obtained in patients with moderate-to-severe AD treated with tralokinumab, a new biologic agent for the systemic treatment of the disease.

AD is a highly heterogenous disease that is understood to be initiated by environmental factors in individuals with a genetic susceptibility. Epidermal barrier disruption, immune activation and dysbiosis of the commensal microbiota in the skin interact and cause the varying clinical manifestations in AD.1 AD is complex, chronic, and characterised by unpredictability and persistent inflammation.1,4

At the molecular level, recent data pinpointed interleukin (IL)-13, a type 2 cytokine, to be a key driver of the underlying inflammation in AD.4,5 IL-13 levels in lesional skin correlate with AD severity.5 IL-13 is produced by several types of immune cells, including CD4 and CD8 T-lymphocytes in lesions composed of the IL‐4Rα chain and the IL‐13Rα1 chain, the former shared with interleukin 4, and signals through JAK1 and tyrosine kinase 2 to STAT6. Through STAT6 activation, IL-13 significantly decreases the expression of key structural skin proteins (e.g., filaggrin, loricrin or involucrin) and changes lipid composition important for normal skin barrier function. It also decreases the production by keratinocytes of antimicrobial proteins increasing susceptibility to Staphylococcus aureus colonisation and induces keratinocytes to attract immune cells resulting in inflammation. By using an alternative receptor complex, IL-13 increases collagen production and decreases its degradation leading to fibrotic remodelling and skin thickening. Last, but not least, IL-13 is considered pruritogenic.5 Therefore, in AD skin the overexpression of IL-13 contributes to the vicious cycle of inflammation, skin-barrier dysfunction and microbiome dysbiosis (Figure 1). 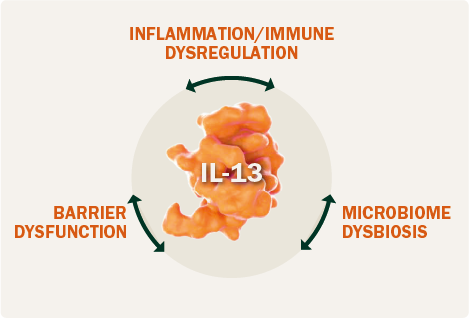 Itch, sleep deprivation, and social embarrassment because of visible lesions impact the psychosocial wellbeing of patients and families.2
Treatment goals in AD are to diminish pruritus and to obtain control of the disease necessary for patients to function in all domestic and professional circumstances. The obtainment of such goals normally requires a multistep approach in order to avoid relevant triggers, improve skin barrier and normalise skin dysbiosis.1 Chronic, underlying inflammation in AD requires additional long-term treatment solutions.1,3,4

Several scales and tools are used to grade disease severity and to determine treatment success in AD. They include: a 5-point investigator global assessment (IGA) scale (0 = clear skin; 4 = severe lesions),6 a 0-72 eczema area and severity index (EASI) composite score based on a body surface-adjusted assessment of the extent and severity of four types of lesions in four body regions (0 = clear; 23-72 = severe AD),7 and a 0-10 pruritus numerical rating scale (NRS) to assess the intensity of itching (0 = no itch; 10 = worst imaginable itch).8 Patient’s quality of life is gauged using a self-reported dermatology life quality index (DLQI) questionnaire in which items add up to a 0-30 score (the higher the score the worse health-related quality of life),9 whilst SCORing Atopic Dermatitis (SCORAD) scale is used evaluate the extent and severity of AD, including itching and sleep disturbances, before and after treatment (SCORAD < 25 = mild disease; > 50 = severe disease).10
An equivalent assessment, but from a patient’s point of view is provided by the 0-28 Patient-Oriented Eczema Measure tool (POEM).11

Targeting the cytokines responsible for AD inflammation constitutes an important therapeutic strategy.5 Mindful of the IL-13 overexpression in AD, IL-13 pathway has emerged as a candidate for targeted therapy.4,5  The inherent specificity of monoclonal antibodies makes them an attractive weapon against specific molecules in the era of precision medicine, hence a specific anti-IL13 antibody, named tralokinumab, was generated.
Tralokinumab is a fully human, high-affinity monoclonal antibody specifically targeting the IL-13 cytokine.12 It neutralises IL-13, a key driver of AD signs and symptoms.4,5,12
When bound to its target, tralokinumab inhibits the interaction with type II receptors and prevents IL-13-induced inflammatory responses in the skin (Figure 2).4,12 Although, the exact molecular mechanism is not fully understood, in clinical trials, tralokinumab was shown to effectively reduce markers of skin inflammation, improve markers of skin-barrier integrity and reduce Staphylococcus aureus colonisation at week 16 relative to baseline level.12 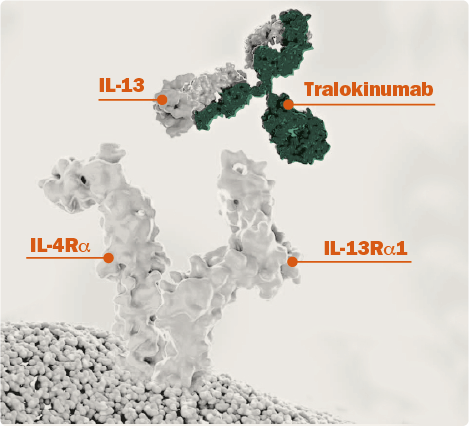 The efficacy and safety of tralokinumab, alone13 or in combination with topical corticosteroids (TCS)14  versus placebo was recently assessed in three phase III randomised, double-blind clinical trials in patients with moderate-to-severe AD.

ECZTRA 1 (NCT03131648) and ECZTRA 2 (NCT03160885) were identically designed 52‐week, international tralokinumab monotherapy versus placebo trials. Following a 2-6 screening period and washout of previous medication, patients were randomised 2:1 to subcutaneous tralokinumab 300 mg or placebo every two weeks (Q2W) for 16 weeks. After this initial treatment period, responders (patients who achieved EASI-75 and/or IGA 0/1) were re-randomised 2:2:1 to tralokinumab 300 mg Q2W or every 4 weeks (Q4W), or placebo for a 36‐week maintenance treatment period. (Figure 3A).  Non-responders at week 16 and patients who did not maintain the response during the maintenance period were placed in the open-label arm and given tralokinumab 300 mg Q2W and an optional use of TCS.13 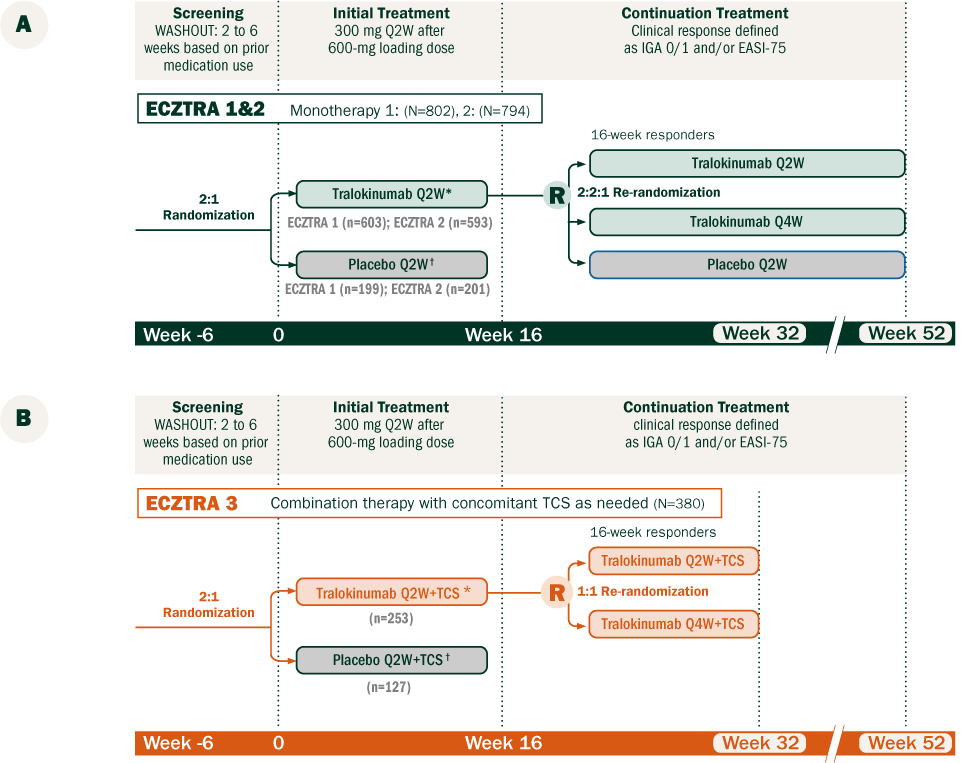 Figure 3. ECZTRA 1, 2 and 3 clinical trial design.12-14
Tralokinumab was administered via subcutaneous injection12-14 every 2 (Q2W) or 4 (Q4W) weeks. TCS, topical corticosteroid.
*Responders were defined as those who achieved an EASI-75 and/or IGA 0/1 at week 16.13,14
†Placebo responders continued with placebo to maintain blind participation and were not included in prespecified analysis after week 16.13,14

A 32-week ECZTRA 3 (NCT03363854) provided the results of the first phase III trial of tralokinumab in combination with a potent TCS  (mometasone furoate, 0.1% cream) for moderate-to-severe AD. Following a 2–6‐week screening period and washout, patients were randomised 2:1 to tralokinumab 300 mg Q2W + TCS as needed or placebo Q2W in combination + TCS as needed. Responders (EASI-75 and/or IGA 0/1 achievers) were re-randomised 1:1 to tralokinumab Q2W or Q4W + TCS as needed for further 16 weeks (Figure 3B). In the ECZTRA 3 trial, TCS cream was dispensed at each visit, subjects were to discontinue the treatment with TCS when control was achieved. Patients were asked to apply a thin layer of the supplied TSC cream as needed. Used and unused tubes were returned at each trial visit to measure the amount of TCS used.14 Non-responders at week 16 received tralokinumab 300 mg Q2W + TCS for another 16 weeks and were included in the prespecified analysis.12

In all trials, patients were allowed to use rescue therapy from day 0. Any patients using rescue therapy, inclusive of TCS use in monotherapy trials, were classified as non-responders.12-14
In all three trials, primary endpoints were EASI-75 and IGA score of 0 or 1 at week 16. Key secondary endpoints included a change in SCORAD, a reduction in weekly average of worst daily pruritus NRS ≥ 4 and a change in DLQI scores, all from baseline to week 16.13,14 Additional secondary endpoints are listed in Table 1.12-14 Maintenance endpoints at week 3214/5213 were meeting identical EASI-75 and IGA 0/1 as those achieved at week 16. The proportion of patients meeting each endpoint was calculated for the tralokinumab arms and compared to the placebo arm as a measure of drug’s efficacy.13,14 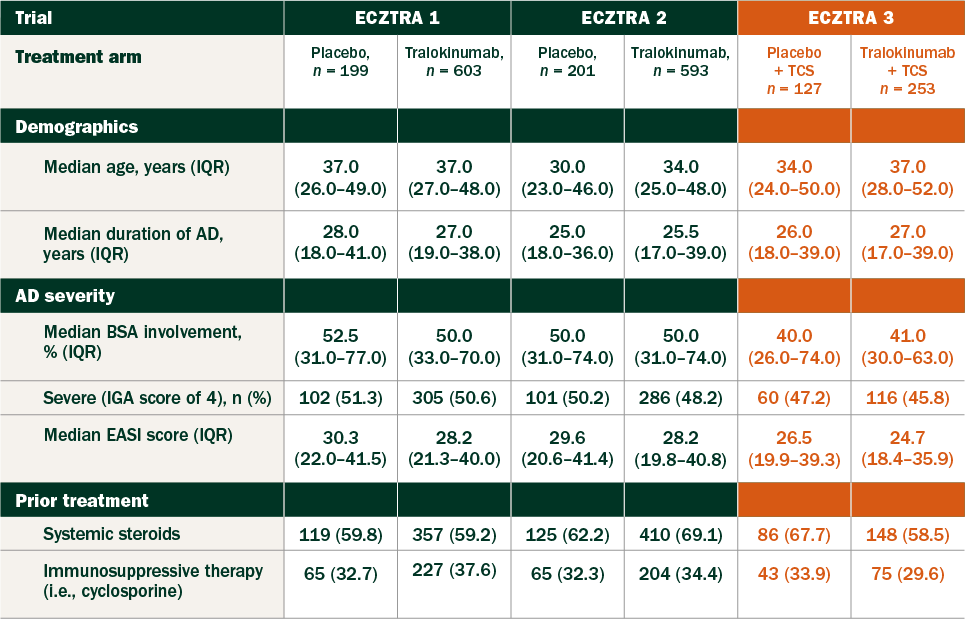 The objective of the 16-week initial period in the ECZTRA 1, 2 and 3 trials was to demonstrate the efficacy of tralokinumab versus placebo. Tralokinumab showed superiority over placebo during the initial treatment period across multiple outcome measures that reflect the signs and symptoms of AD.12-14
In the monotherapy trials, two to three times as many patients treated with tralokinumab versus placebo achieved improvements in both EASI-75 and IGA 0/1 at week 16 (Figure 4).12,13 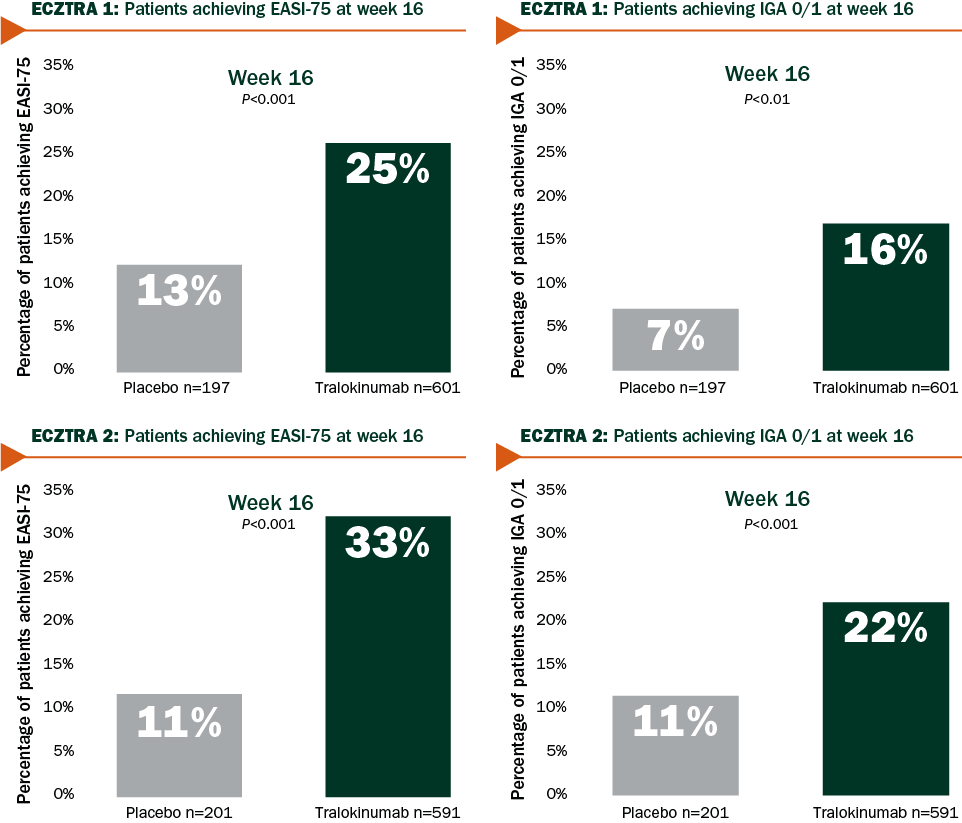 Taken together, data show that tralokinumab demonstrates significant improvements across all primary and secondary endpoints.12-14

ECZTRA 1 and 2 trials included a maintenance treatment period lasting 36 weeks allowing for a total observation period of 52 weeks, i.e., a year. In ECZTRA 3 trial, maintenance period had a duration of 16 weeks adding up to a total observation time of 32 weeks. The objective of the maintenance period was to demonstrate maintained response to tralokinumab at two different dose options or placebo in the ECZTRA 1 and 2 trials and to tralokinumab Q2W or Q4W + TCS as needed in the ECZTRA 3 trial (no placebo arm was foreseen in the maintenance phase of this latter trial).13,14

Figure 6. Maintenance endpoint outcomes in ECZTRA 1 and 2 trials.12,13,15
All patients re-randomised to tralokinumab or placebo from weeks 16-52 had been initially treated with tralokinumab Q2W from weeks 0-16.

In the ECZTRA 3 trial, 9 out of 10 responders treated with tralokinumab (Q2W) +TCS as needed experienced sustained disease control. (Figure 7). 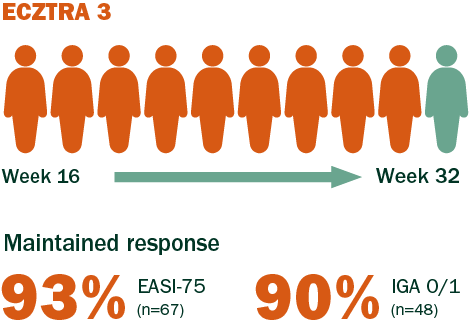 Therefore, maintenance treatment results demonstrate that tralokinumab provides long-term control of chronic AD.12-15 Having achieved a response, Q4W dosing could be appropriate for some patients.15 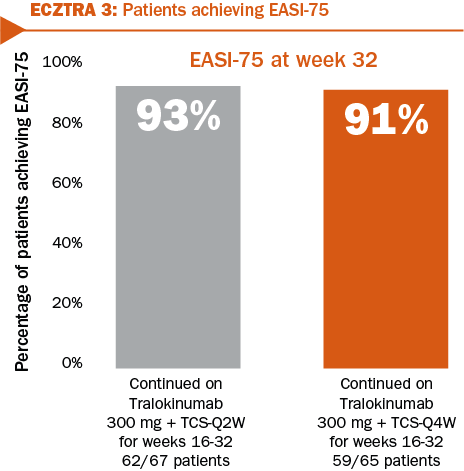 Figure 9. Proportion of patients achieving EASI-90.16  Placebo arm was followed-up only to week 16.
†Patients who achieved IGA 0/1 and/or EASI-75 at week 16 were re-randomised 1:1 to tralokinumab (Q2W or Q4W) + TCS as needed.16
TCS, topical corticosteroids.

Further post hoc analyses looked into the effects of treatment with tralokinumab + TCS as needed on patient-reported outcomes (PRO) over the 32-week treatment period in the ECZTRA 3 trial.17 All improvements in PROs were seen in patients taking tralokinumab + TCS as needed from baseline to week 16 and were maintained at week 32 (Figure 10). With respect to placebo, weekly average of worst daily pruritus NRS scores seen for the tralokinumab + TCS arm separated in a statistically significant manner from week 3 (p < 0.05), eczema-related sleep interference from week 2 (p < 0.05), the DLQI scores from week 2 (P < 0.01) and POEM scores also from week 2 (p < 0.01) onwards and with respect to baseline continued to improve up to week 32.17 Collectively, tralokinumab provides sustained improvements in the burden of disease.17 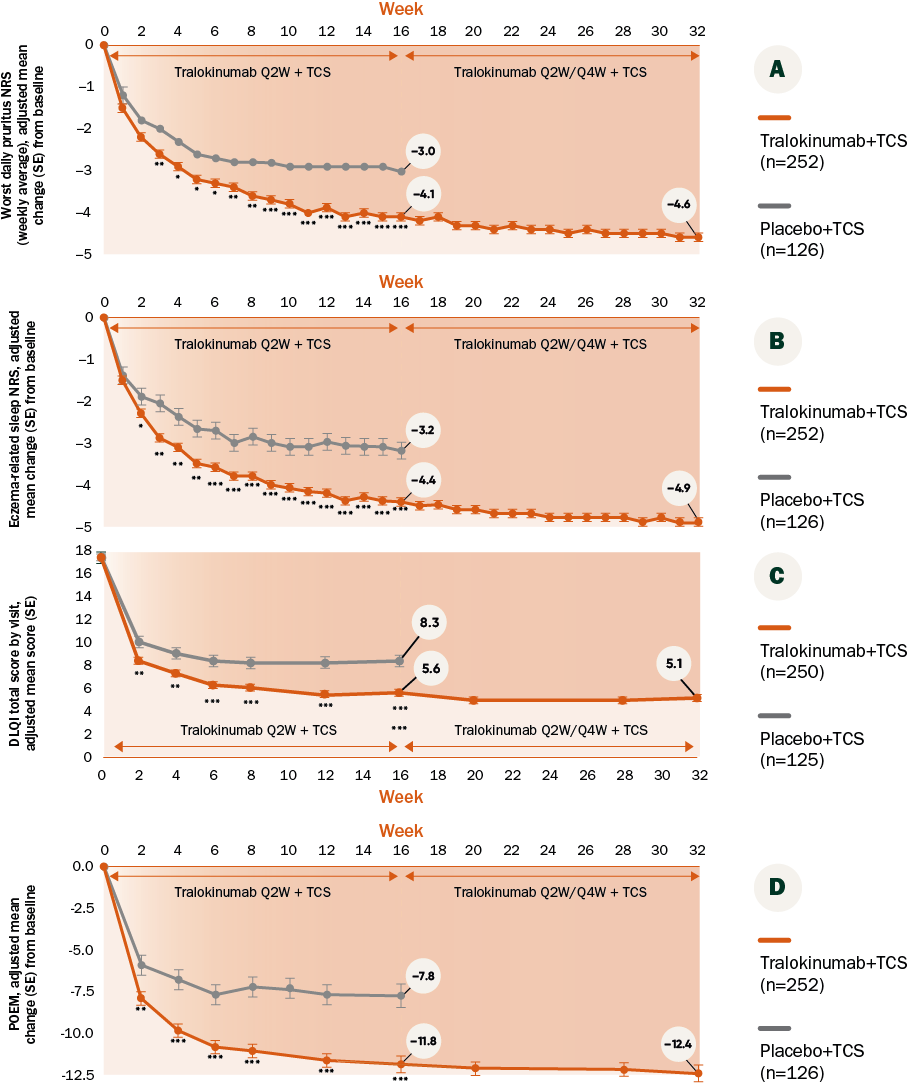 The safety analysis was performed pooling together safety data from five randomised, double-blind, placebo-controlled Phase III (ECZTRA 1,2,3) and Phase II (ECZTRA 5 (NCT03562377) and the dosing IIb trial (NCT02347176).18 In this dataset of more than 2000 patients, the overall frequency and severity of adverse events (AE) with tralokinumab were comparable to placebo in the initial treatment period at 16 weeks (Table 3). Amongst AE of special interest, skin infection, defined at the level of system organ class and preferred terms in the MedDRA dictionary, was reported in 5.5% of placebo-treated patients compared to 2.6% of tralokinumab-treated patients. The safety profile at week 52 was consistent with the initial treatment period and comparable to placebo.18 Conveniently, tralokinumab requires no initial lab testing or ongoing monitoring. Ninety-eight % of conjunctivitis (AE of special interest) cases reported were mild or moderate and the majority resolved during treatment.18

Table 3. Overall tralokinumab safety summary and most frequent adverse events by preferred term in MedDRA in the initial treatment period.18
*Pooled data included phase IIb and ECZTRA 1, 2, 3, and 5 data for the initial treatment period (12 weeks in the dose-finding trial and 16 weeks in the ECZTRA trials). †As defined by MedDRA. MedDRA, Medical Dictionary for Regulatory Activities. AE, Adverse event.

This review shows that tralokinumab delivers progressive and sustained control needed by patients with AD.1,4,12,14,16
Tralokinumab is the first and only biologic developed to specifically neutralise IL-13, a key driver of atopic dermatitis.4,12 In the three phase III, randomised, double-blind, placebo-controlled trials for patients with moderate-to-severe uncontrolled AD who were 18 years of age or older, tralokinumab demonstrated significant improvements across all primary and secondary endpoints12-14 and provided long-term control of chronic AD.12,13,15 A progressive improvement was seen beyond week 16 in patients treated with tralokinumab and TCS as needed.14,15 Tralokinumab is well tolerated and shows a favourable safety profile over 52 weeks.18

The role of tralokinumab in the treatment of atopic dermatitis